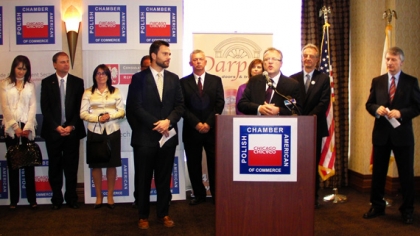 The Workshop on May 19, 2012, Enhancing Poland-US Collaboration in Business- brought together impressive mix of Polish business, government and community leaders from both sides of the Atlantic. The meeting resulted in signing of the 3C’s Chicago Declaration.

The aim of this unprecedented summit was to increase business relations between Poland and the US to promote Polish economy and business prospects for smaller, family-owned companies.

The event was organized by the Trade & Investment Section of the Embassy of Poland in Washington DC, Polish American Congress/Polish National Alliance  (PAC/PNA) and the Polish American Chamber of Commerce (PACC) in Chicago.

Minister Pawel Pietrasienski and his team from the Embassy conducted a daylong workshop at the Chicago Hyatt Regency O’Hare Hotel, PAC/PNA President Frank Spula hosted a dinner at the spectacular Copernicus Center and PACC Chicago Executive Director Bogdan Pukszta and his Board hosted a “Passport to Poland” networking reception at the exclusive Metropolitan Club in downtown Chicago.

Despite differences, a unanimous agreement was reached to strengthen collaboration, cooperation and communication, so called 3C’s, between the participants. Progress is to be reviewed and evaluated next year at a follow-up conference in Las Vegas in 2013.

A Declaration of Joint Effect on enhancing Poland-US cooperation in small business initiatives was signed by the participating stakeholders: