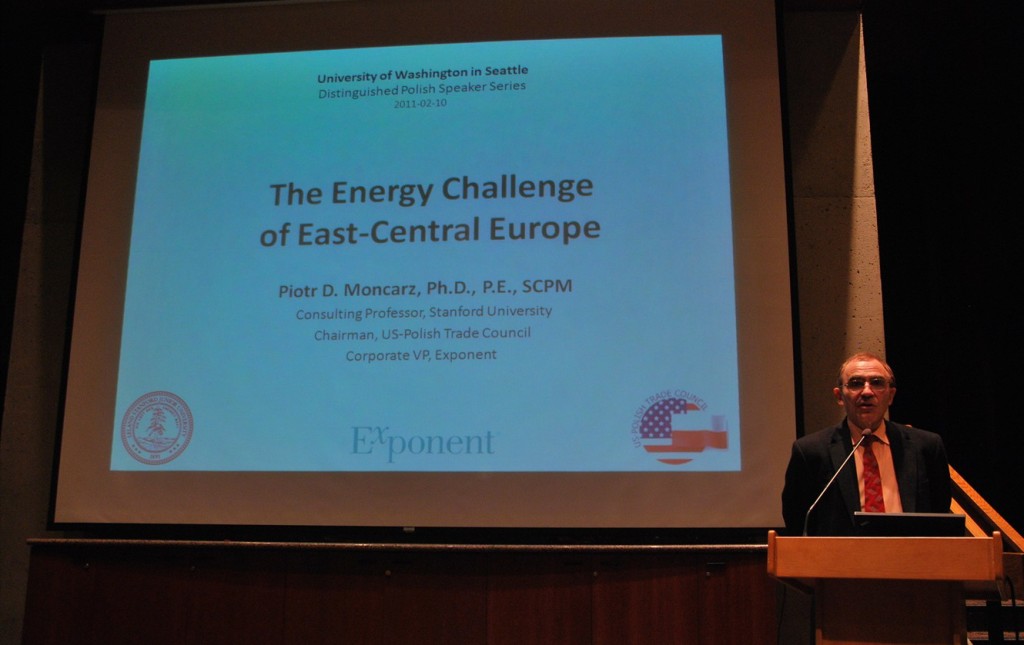 A radical question and a lecture “The Energy Challenge of East-Central Europe” at the University of Washington on Feb 10 spurred a thoughtful debate about the future energy in Europe.  Silicon Valley expert willing to bet on the game-changing alternatives while skeptics raised concerns about the economic and environmental impact.

The lecture was long awaited in Seattle. Spearheaded by the Polish American Chamber of Commerce Pacific Northwest and endorsed by the Trade and Investment Section of the Polish Embassy in Washington, DC, it was hosted at the University of Washington by Jackson School of International Studies. Senator Henry Jackson, a stout cold-war anti-communist democrat, whose name now adorns the International School Building, would be gloating that a former eastern block country is setting its ambitions on leading the energy transformation in Europe.

The speaker, Prof. Piotr Moncarz, is no stranger to bold thinking. Stanford University Consulting Professor and a VP of a public engineering corporation, Exponent, uses his ivory tower academics and industry know-how to push the boundary of imagination. In 2002, he started the US-Polish Trade Council with a group of Silicon Valley experts. Today the council serves as a major bridge for US and Polish government, enterprise and academia cooperation.

Who would have imagined 20 years ago when the Iron Curtain came down that a Polish engineer would crisscross the Atlantic several times a year to lead disruptive technology conferences and to consult on major power projects. In a classic Silicon Valley formula, Prof. Moncarz and his US-Polish Trade Council team bring bright minds together to seek innovative solutions to US, Polish and global challenges.

On Feb 10, Seattleites packed Kane Hall to hear Prof. Moncarz’s ideas about the energy challenge in East-Central Europe. Some came to learn about the geopolitical ramifications of Russia’s new gas pipelines that will bypass Poland, others to protest potential damage to Poland’s environment.  A few wanted to find out why the concern with gas if over 95% of Poland’s power comes from coal.

Poland boasts the world’s largest per capita coal reserves but unlike UK, Norway or Russia it lacks conventional natural gas. 70% of its current gas is piped from Russia. Geologists claim that Poland sits on massive reserves of unconventional natural gas imbedded deep in the layers of shale rock. First reliable estimates of shale gas deposits in Poland are expected in spring 2011.

To slow climate change and to stay competitive with the rest of Europe, Prof. Moncarz urged: “Poland needs to switch from coal and oil to cleaner fuel like natural gas. Faced with the EU’s limits on greenhouse emissions on one hand and Russia’s dominance as a supplier of natural gas on the other, Poland must perform some rational hard-facts analysis to pick the optimum direction.”

University of Washington Evans School of Public Affairs Visiting Professor, Zbigniew Bochniarz, whose expertise center on market driven environmental and sustainability  policies, says: “Short and mid-term, Poland can realize tremendous gains from efficiency improvements and conservation. With 2.5 times the energy use per unit of GDP of EU-15, Poland can get in line with EU 2020 New Growth Strategy with measures like electrical grid technology, modernization of infrastructure, green building construction, anti-sprawl policies, waste management, efficient public lighting, efficient vehicles, and investment in public transit, bicycle and pedestrian solutions and so on.”

“Before we rush to invest in new risky – environmentally and economically – sources of energy, we need get rid of Poland’s huge energy waste.  It makes no sense to produce more power-except to nuclear or shale gas companies-and to continue an inefficient economy. Only after we reduce the waste, we will have a clear picture of what Poland’s real energy needs are.”

Prof. Moncarz, in his lecture, suggested that-in addition to conservation- a novel approach to energy production is also necessary to leapfrog the current limitations. Switching to natural gas tomorrow would reduce CO2 emission by 50% but it would also increase Poland’s dependence on Russian gas, an option that may not be politically palatable. The 2009 gas disputes between Russia and Ukraine is a recent reminder that over-reliance on Russian import presents risk to Polish security.

“Thus, disruptive technologies like shale gas extraction or underground coal gasification may be the ticket to Poland’s long-term energy independence and export,” said Prof. Moncarz. Poland has awarded more than 70 licenses for unconventional gas exploration to over 40 companies and the exploration has begun.

“Although these options are not yet perfected to the point of feasibility and cost-effectiveness, research continues and the potential to develop domestic gas supply is promising,” said Prof. Moncarz.

“To capitalize on these technologies, Polish engineers, scientists, entrepreneurs and policy makers must stay in the game. Yes, Poland can become the Kuwait of gas in Europe,” Prof. Moncarz smiled at the radical thought. “Developing the framework, knowledge and human capital is part of the equation.”

“Clearly in the near term, developing Poland’s shale gas resources is the easiest and least complicated way of moving forward,” says Prof. Gadomski. “However, the problems facing developers of the shale gas formation in the US are environmental concerns and in some cases a moratorium on drilling or temporary suspension of hydrofracking.” Hydrofracking-a hydraulic fracturing of rock-which involves injecting large quantities of water and chemicals into the ground, has raised concerns about contamination of drinking water.

“Until the dangers to the water table from pollution and the sheer quantities of water needed for hydrofracking are addressed, the current technology may not be ready for drilling in Poland,” says Prof. Gadomski.

Coal proponents want to know if underground coal gasification is further along the way. “There’s much excitement about clean coal technology developed and promoted by Polish-American engineer and scientist, Dr. Bohdan Żakiewicz,” said Prof. Moncarz. With potential to cut CO2 emissions by half and to leave all the contaminants underground, Poland’s large coal reserves might continue to offer the competitive advantage. Prof. Żakiewicz, who dedicated 50 years to the pursuit of clean coal mining solutions, was recently nominated for a Nobel Prize.

On Tuesday Feb 22, the Polish government approved two bills to lay the framework for its nuclear power industry. It plans to meet 15% of its energy needs from nuclear power by 2030. The first plant will most likely be built in Zarnowiec, outside of Gdansk near the Baltic Sea coast in north Poland. (Warsaw Platts Feb 23, 2011)

“Substituting biomass for coal in large co-firing facilities as in UK, Netherlands and Germany, can pare CO2 emissions by 10% and keep coal miners employed, both social and political advantages,” says Prof. Gadomski. “Buying wind turbines from China, India or Western Europe or nuclear reactors from France, Japan or Russia makes little economic sense though. Licensing the technology from foreign partners and producing the turbines and small modular nuclear reactors at home is a much better alternative for Poland’s economic development.”

Bloomberg New Energy analyst, who powers his California house by solar panels, says Poland’s energy options will be shaped by ongoing STEEP analysis. “The best solution will be Poland-specific. Solar power for instance for a North European country may not be the smartest choice,” he smiles.

“Picking winners now-nuclear or shale gas-without careful calculations reminds me of Poland’s failed investment practices in the past. Poles paid heavy price for those mistakes,” says Prof. Bochniarz. “Now that Poland is a democratic state, it needs to conduct cost-benefit analysis factoring the health, social and environmental impact. Prof. Bochniarz had served on many environmental boards in transitioning economies of East-Central Europe. Currently he is a member of the Association of Environmental and Resource Economists in the US and Europe and an affiliate faculty of Microeconomics Competitiveness Program at Harvard Business School. 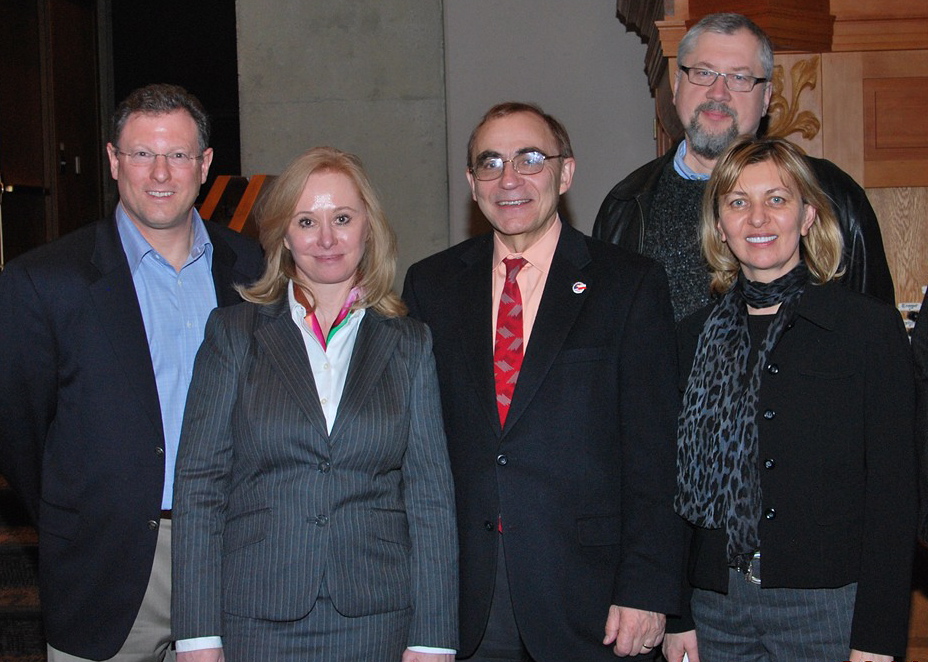 The energy lecture in Seattle concluded with a reception-a mix of students, academics, engineers, activists, investors and representatives from Boeing, Microsoft and the Polish American community. Capital Management consultant and frequent speaker on the issues of oil and gas peaks offered a follow up presentation on the lack of cost-effectiveness of shale gas extraction. A Polish Fulbright professor shared a personal story about community opposition to wind farms in the Pomeranian region. A few guests asked what is a “Consulting Professor”.

“A Consulting Professor is a university researcher or lecturer who also works in the field of interest and uses his industry experience to make education relevant to real life problems,” says Lisa Kubicki, Professional Leadership Coach at Stanford Graduate School of Business.

The genius of Stanford University is creating the space for public, industry, academia, government and capital to collaborate and innovate. “That’s the reason why an electric car was invented in Silicon Valley and not in Detroit,” said Prof. Moncarz.  On Feb 10 that space was created at the University of Washington.

A follow- up radio interview with Prof. Moncarz in Polish is available for streaming at www.radiowisla.com