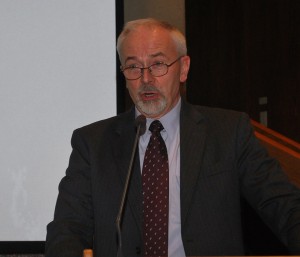 Zbigniew Bochniarz, Ph.D.,  joined the University of Washington’s Evans School faculty as a visiting professor in 2007. His teaching and research focus on the microeconomics of competition, strategies for sustainable development, and the economic, environmental, and social aspects of sustainability during the transformation processes in post-communist countries. Since 2005, Prof. Bochniarz has served as an affiliate faculty member of the Microeconomics of Competitiveness program at Harvard Business School. He also previously served as a visiting professor and senior fellow from 1986-2006 at the University of Minnesota’s Hubert H. Humphrey Institute of Public Affairs, and at the Labovitz School of Management and Economics at the University of Minnesota-Duluth from 2006-07. He also served on the faculty at the Warsaw School of Economics from 1968-85.

Prof. Bochniarz is the founder of the Center for Nations in Transition at the Humphrey Institute for Public Affairs, which became an international leader in designing and delivering foreign assistance programs to Central and Eastern Europe in the areas of education, environment, and institutional reforms for sustainable development. The center has initiated more than 20 projects raising $38 million and training 44,000 people in the countries of Bulgaria, Czech Republic, Hungary, Poland, Romania, Slovakia, and Ukraine.